Feminist art in the 1970s was associated with consciousness-raising about women’s role in society. The focus was on the “political is personal” and challenged the dominance of men in both art and culture so women could define themselves on their own terms.

In 1975, I moved into a women’s collective and was at a crossroads as an artist. It was time to decide on the next steps in my creative life. The turning point came when I read Through the Flower: My Struggle As a Woman Artist by Judy Chicago and learned about the Feminist Studio Workshop in Los Angeles.

I was working on a large painting titled Centering at the time that had a colorful crossroads image in the middle of the canvas. It appeared to be a sign. Divine intervention intervened when another woman in the collective decided to move to California as well. By September, I was on the road driving west to start a new life in Los Angeles. 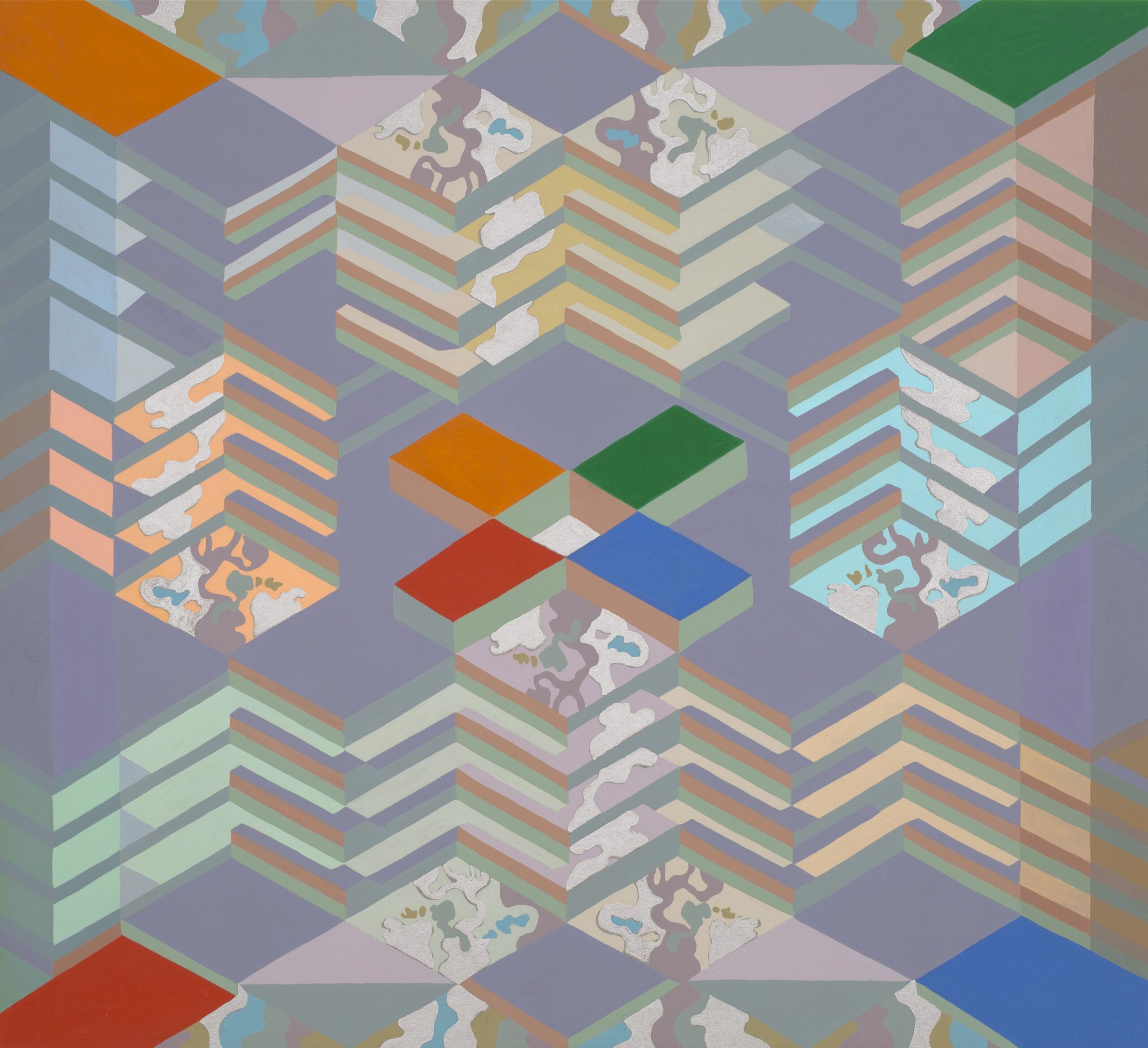 Woman to Woman Exhibition at the Woman’s Building, Los Angeles, 1975

When I arrived at the Woman’s Building in 1975, I had no idea what to expect. This was a totally new woman-centered environment unlike any other I had ever experienced. A quotation by Judy Chicago in 2011 describes it best when she said: “The establishment of the Woman’s Building in Los Angeles happened at a magical historical moment. Women artists all over the country were starting to rise up in the face of decades of discrimination that had marginalized or ignored their contributions.”

The Fast Speaking Woman poem by Anne Waldman was the inspiration for a joint collaborative artwork for the Woman to Woman opening exhibition at the Woman’s Building in 1975. I was one of five women who created a 60″ x 60″ panel that featured 24 images inspired by the poem. It was liberating to select images that illustrated so many positive variations of what a woman could be. It allowed us to reject the confining female roles established by the patriarchal society. 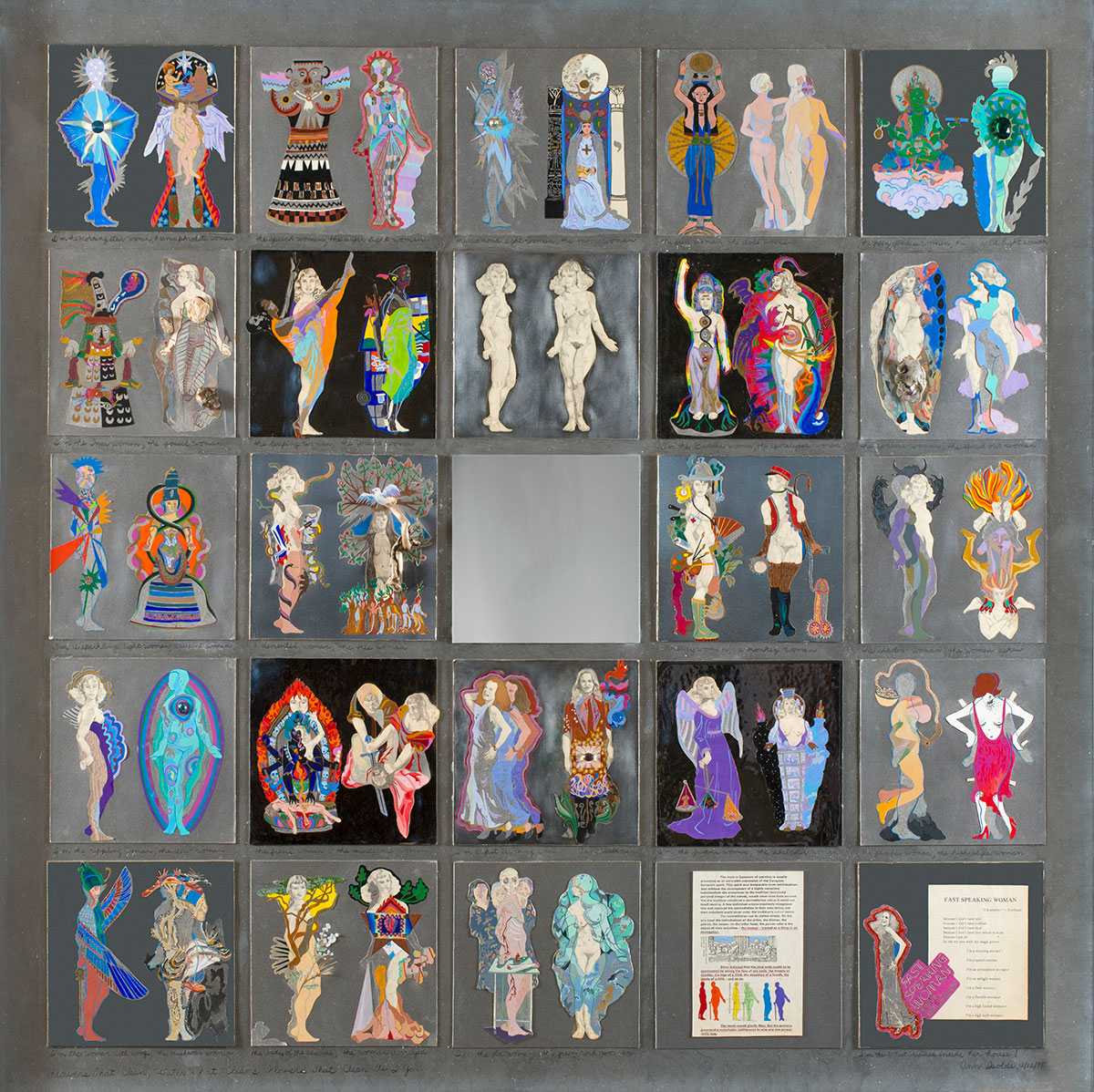 Fast Speaking Woman, 1975, Masonite panel painted silver and decorated with 24 squares with double images plus a mirror in the middle, 60″ x 60″

Excerpts from this poem that inspired images in my Fast Speaking Woman artwork:

We were intent on bringing attention to female stereotypes and hidden values about the status of women within the dominant culture. Our goals were to confront sexual harassment and rape and reject negative descriptions of women such as cunts, bitches, bimbos, pussy, ball breakers, femme fatales, whores and sluts as well as being expected to fulfill certain traditional female roles and, if working outside the home, directed towards lower paying jobs or not receiving the same pay as a man in the same position.

I wore a headband at the Woman’s Building because I had naturally curly hair. One day, art historian Arlene Raven asked me, “I wonder what kind of paintings you would create if you took that headband off and let it fly.” I came up with the idea of creating a visual performance where an action in the real world would trigger a fantasy in my imagination. The result was the six images below that represent a separation ritual, a rebirth and taking flight. 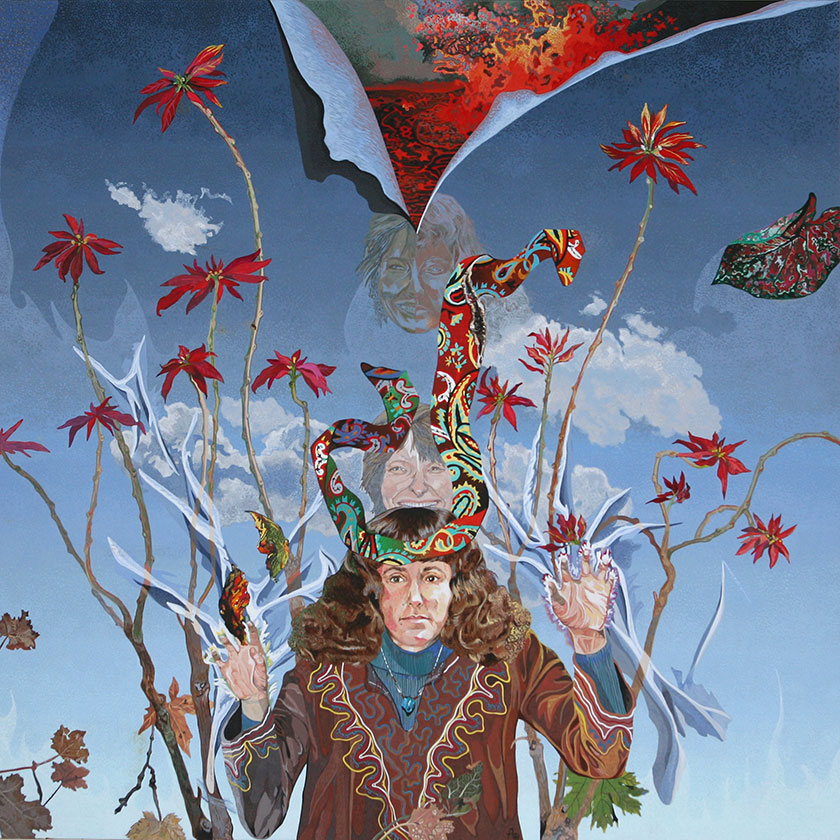 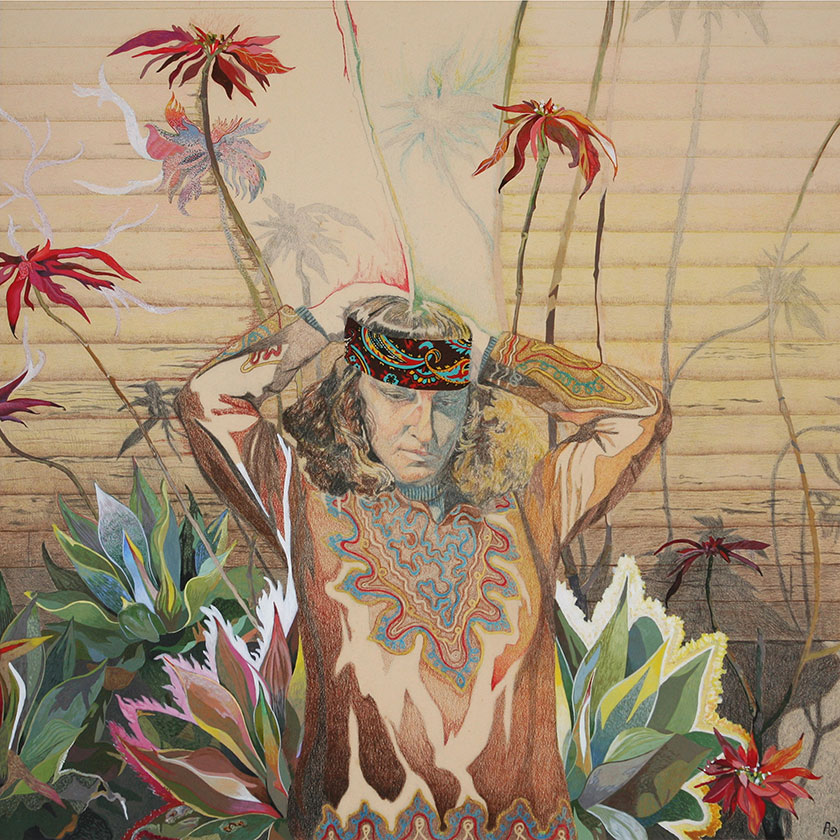 REALITY: Untying the Knot, 1976, acrylic and colored pencil on paper mounted on Bristol Board, 17″ x 17″ 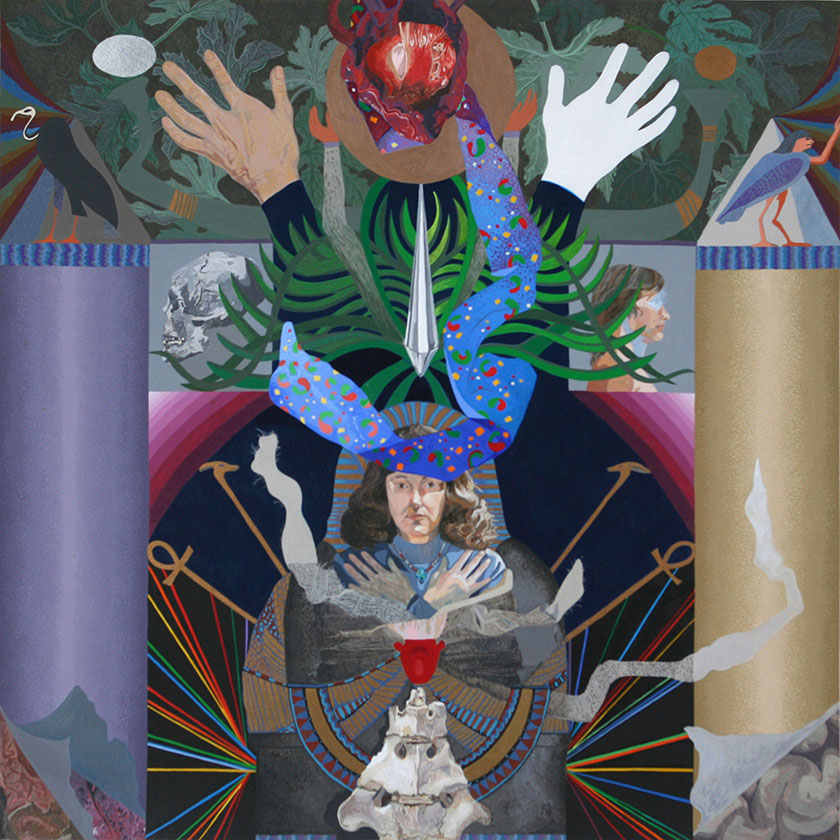 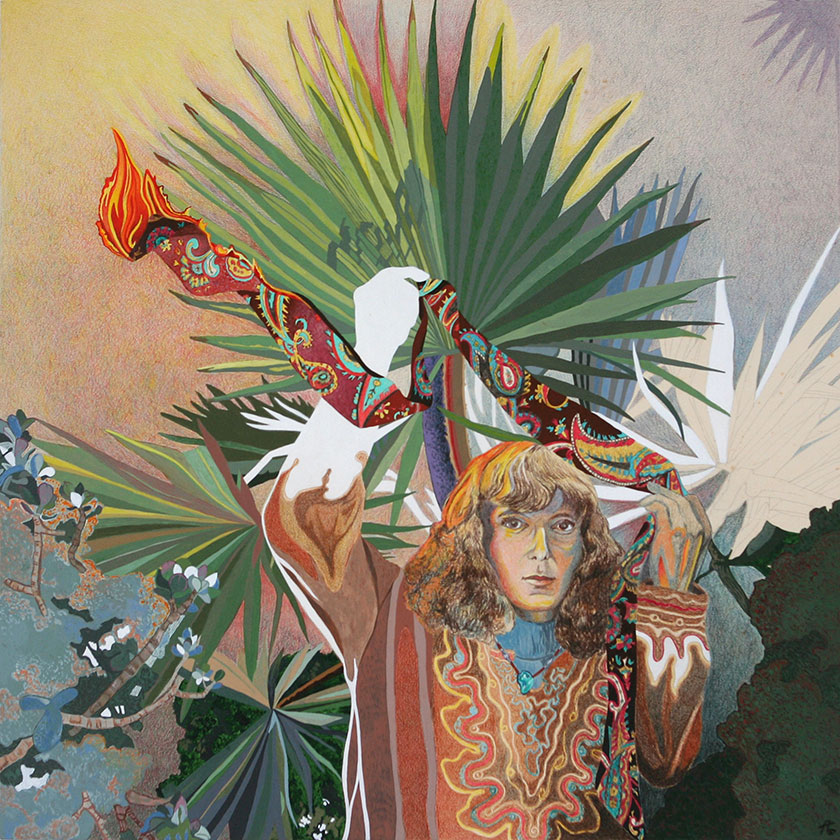 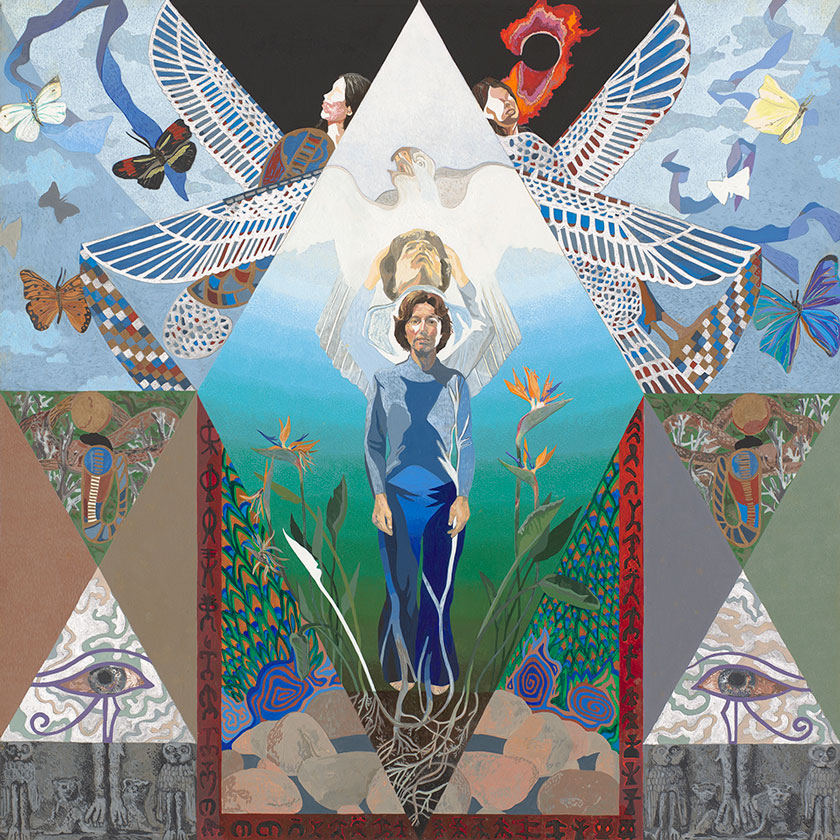 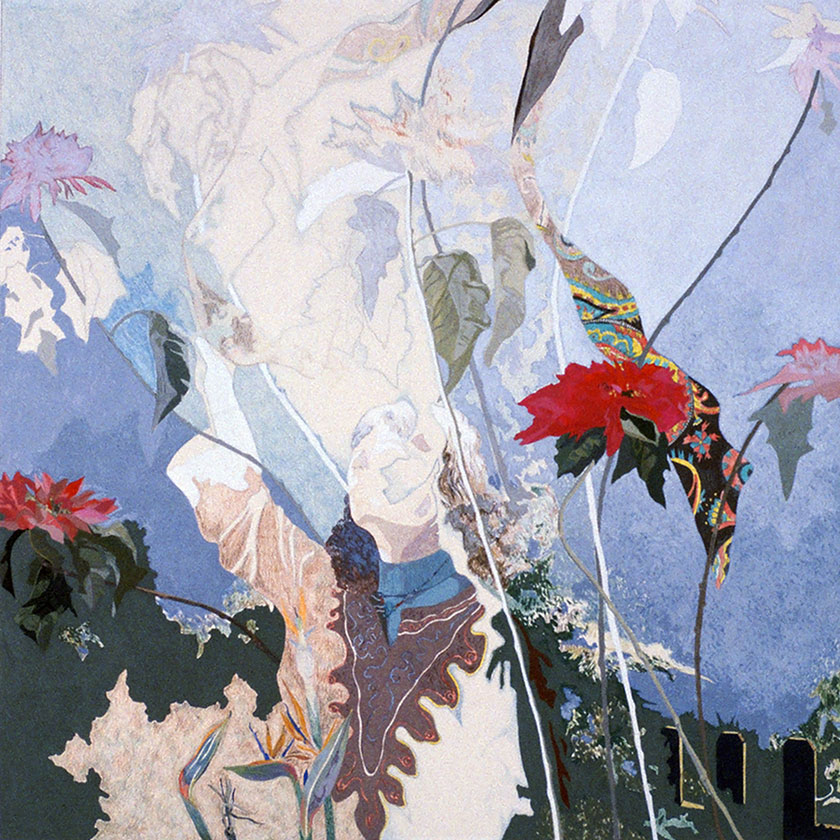 In 2014, I met an artist / activist named Micol Hebron. She invited me to participate in a crowd-sourced action titled The Gallery Tally Project to collect and visualize statistical data regarding ratios of male to female artists in top contemporary art galleries.

Each artist was asked to create a 24″ x 36″ poster and design their own image for the gallery assigned to them. My Los Angeles gallery was TIF SIGFRIDS, which had a ratio of 20% women to 80% men. The design is based on two photographs art historian Linda Nochlin featured in an essay titled “Starting from Scratch” in the Power of Feminist Art to show how ridiculous it would be to present the male model she hired in a similar sexist way. 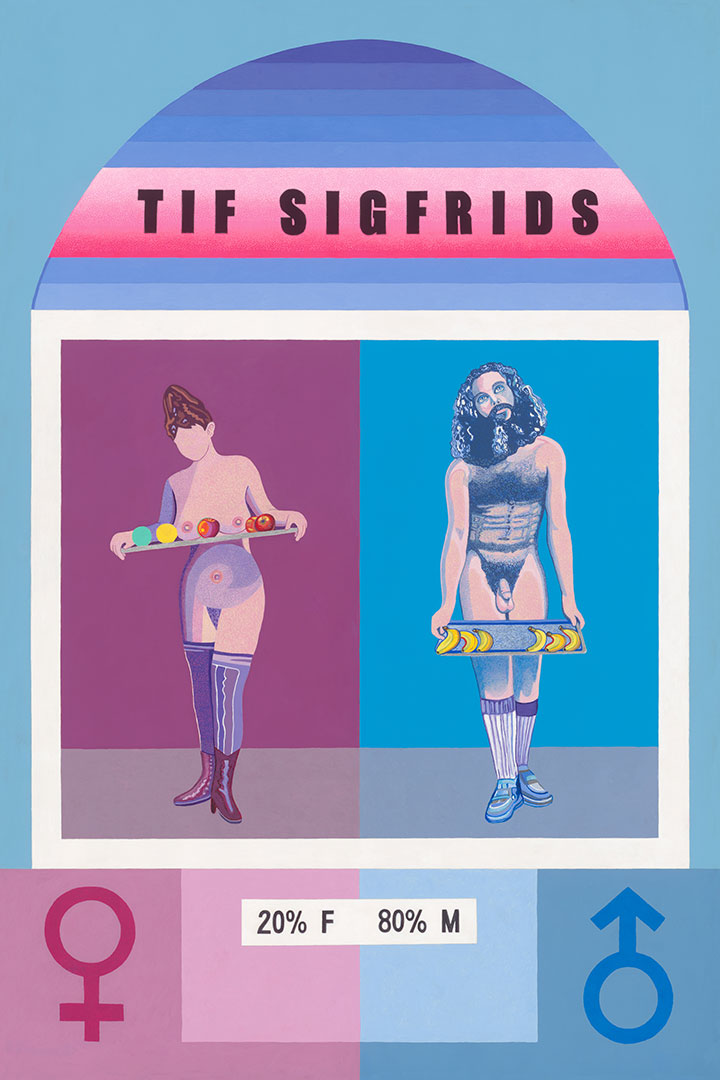 In 2014 the total percentage of female artists from galleries tallied in Los Angeles and New York City was 32.3%. That same year, The New York Times reported on the gender gap in America’s top museums, a quarter of which were run by women who earned about a third less than their male counterparts. While women had made strides in small and midsize organizations, the gap at the most prominent institutions were glaring (Accountability in Art: Gallery Tally Calls Out the Gender Gap).